In Computer
7 Answers Available
Asked by Ndianabasi on 9th July, 2019
To get notifications when anyone posts a new answer to this question,
Follow New Answers

mhz vee
6 months ago
On-line real time processing
It is a method whereby the computer processes data as it is entered and alters or updates the required file immediately. It is the processing of individual transactions as they occur through equipment that operates under the control of the central processor. Terminals are utilized to enter data since they provide immediate and direct input to the data processing flow, eliminating the need for manual transmittal. The speed of data collection and input is usually increased.
Examples:
i. On-line tracking of inventories for production and sales
ii. Cash withdrawal from automated teller machine
iii. On-line mobile money transfer
iv. Flight booking system at a travel agency
v. International hotel reservation
vi. E-commerce
vii. E-business
viii. Airplane Traffic Control
ix. Space Exploration

b. Help Desk
A help desk is a resource intended to provide the customer or end-user with information and support related to a company's or institution's products and services. The purpose of a help desk is usually in troubleshooting problems and to provide guidance about products from the company such as computers, electronic equipment, food, apparel, or software. It provides a single (or multiple) point of contact for users to gain assistance in troubleshooting, get answers to questions, and solve known problems. A help desk generally manages its requests through the use of software such as issue tracking systems. These systems often involve the use of a "local bug tracker" (LBT). This system allows the help desk to track and sort user requests with the help of a unique number, and can frequently classify problems by user, computer program, or similar categories.
A help desk is usually operated by individuals that have an extensive background of the appropriate system, so that they can walk users through step-by-step solutions to their problems.
Corporations usually provide help desk support to their customers through various channels such as toll-free numbers, websites, instant messaging, or email.
c. Advantages of using interpreter instead of compiler translation program
i. An interpreter runs the application during run time, whereas a compiler needs to process the application into binary first, which may take time depending on its size.
ii. An interpreter usually allows for easier debugging as it is not getting compiled, and may even be changed while an application is running but compiler does not allow for easy debugging
iii. With an interpreter, no intermediate object code is generated, hence are memory efficient while compiler generates intermediate object code
iv. An interpreter takes less of time than the compiler takes a lot of time to analyse the source code
v. An interpreter continues translating the program until the first error is encountered but when using compiler, errors can only be detected when the output is not correct
vi. An interpreter translates program one statement at a time whereas the compiler translates the whole code.

d. Firewall
A firewall is a software or a hardware in a network security system that controls the incoming and outgoing network traffic by analysing the data packets and determining whether they should be allowed through or not based on a set of rules. It is a security system intended to protect an organization‟s network against external threats, such as hackers coming from another network. It is usually a combination of hardware and software that prevents computers in the organisation‟s network from communicating directly with computers external to the network and vice versa.
The purpose of a firewall is to detect and prevent any attempt to gain unauthorised entry through the Internet into a user‟s computer or Intranet system.
A firewall:
i. Will block suspicious messages from the Internet, and prevent them from entering the user‟s computer
ii. May provide an on-screen report to the user whenever it has blocked a message, so that the user is aware of the existence of the messages.
There are four firewall techniques, which are:
 Packet filter
 Application gateway
 Circuit-level gateway
 Proxy server

isaaq
6 months ago
1.Real-time data processing is the execution of data in a short time period, providing near-instantaneous output. The processing is done as the data is inputted, so it needs a continuous stream of input data in order to provide a continuous output. Good examples of real-time data processing systems are bank ATMs, traffic control systems and modern computer systems such as the PC and mobile devices. In contrast, a batch data processing system collects data and then processes all the data in bulk in a later time, which also means output is received at a later time.

Real-time data processing is also known as stream processing.
A real-time data processing system is able to take input of rapidly changing data and then provide output near instantaneously so that change over time is readily seen in such a system. For example, a radar system depends on a continuous flow of input data which is processed by a computer to reveal the location of various aircraft flying within the range of the radar and then display it on a screen so that anyone looking at the screen can know the actual location of an aircraft at that moment.

Real-time data processing is also called stream processing because of the continuous stream of input data required to yield output for that moment. Good examples are e-commerce order processing, online booking and reservations, and credit card real-time fraud detection. The biggest benefit of real-time data processing is instantaneous results from input data that ensures everything is up to date. Batch processing, on the other hand, means that data is no longer timely.
Like 1    Dislike 0    Reply    Quote    Follow

HENRYVILLA
6 months ago
Definition - What does Real-Time Data Processing mean?
Real-time data processing is the execution of data in a short time period, providing near-instantaneous output. The processing is done as the data is inputted, so it needs a continuous stream of input data in order to provide a continuous output. Good examples of real-time data processing systems are bank ATMs, traffic control systems and modern computer systems such as the PC and mobile devices. In contrast, a batch data processing system collects data and then processes all the data in bulk in a later time, which also means output is received at a later time.

Among the many clichés that one hears in today’s harried business environment is the phrase “time is money.” While a cliché by its nature is worn out, this one is quite descriptive of the current demands on Information Systems. Traditional periodic mode systems that provide information primarily through periodic reports that are hours, days, or weeks out of date can put an organization’s decision makers at a disadvantage if its competitors are using up-to-date information to make the same decisions (e.g., recall the importance placed on timeliness and relevance in Chapter 1). The pressures for timely information flows coupled with significant advances in available information technologies led to a rapid migration towards online real-time systems. Online real-time (OLRT) systems gather business event data at the time of occurrence, update the master data almost instantaneously, and provide the results arising from the business event within a very short time—i.e., in real-time. OLRT systems complete all stages of business event data processing in immediate mode. Immediatemode is the data processing mode in which there is little or no delay between any two data processing steps (as opposed to periodic mode, in which there is a significant delay between two or more data processing steps).


OLRT systems typically require three basic subprocesses to be completed before an event is converted into information that can be used by decision makers. Figure 4.3 illustrates each of these subprocesses.

Business event occurrence and recording of event data: At the time of the business event, related data are entered directly into the system. Source documents are almost never used, as they significantly slow the process and remove some of the advantages of nonredundant data entry. Notice that the data entry process where the sale is entered into the system is the same as in Figure 4.2 (other than the absence of an audit file). This process is consistent with the use of online transactionentry (OLTE) for OLRT systems.
Update master data: Each business event entered into the system is processed individually and any calculations and summarizations completed. This information is then used to update the master data. Note in Figure 4.3 that the processing is now being done on-site where the sales event data are entered.2 Because each business event is processed independently and immediately, the master data at any given time will be within seconds of being up to date. When your books and CDs store is entering your information into the computer, it may be using an OLRT system if it is important to the store to know whether a given book or CD title is in stock at a given time—perhaps to answer a customer’s question. 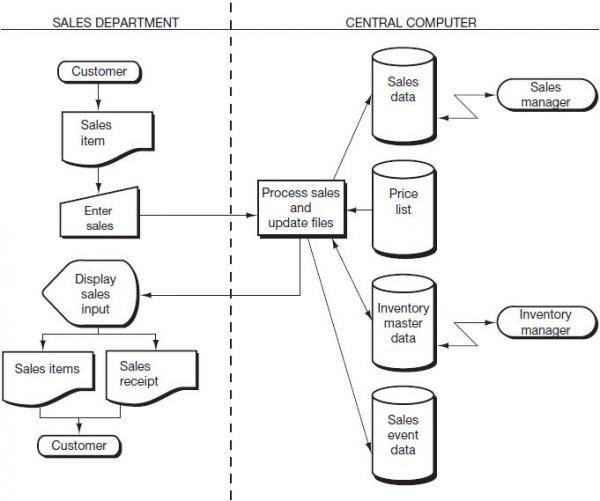 Ask Your Own Question