Members of the Senior Staff Association of Nigeria Universities (SSANU) and the Non-Academic Staff Union of Universities and other Allied Institutions (NASU) at the University of Lagos (UNILAG) have kicked against the decision of the leadership of the union to suspend the industrial action embarked by the union.

The aggrieved members, during a congress held in the institution on Wednesday, Aug 24, booed at the representatives of the national leadership, saying they decided to suspend the strike without the consent of the workers, who they claimed made the decision for the industrial action. 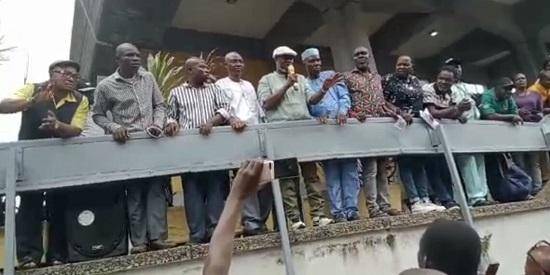 The union members maintained that they were not in support of the decision to suspend the strike while their five-month withheld salaries during the course of the strike remain unpaid and vowed to continue the strike.

They were also said to have violently chased away the branch chairmen of both NASU and SSANU and other executive committee members accusing the leadership of the unions of being bribed by the government, while some leaders were pelted with sachet water and stones.

Recall that the national leadership of the unions had announced the suspension of its 5-month-old strike in view of giving room for the federal government to implement all the agreements reached. The strike suspension which took effect on Wednesday, August 24, will last for a period of 2 months after which it may be revisited if their demands are not met.

UNILAG student slumps and dies during a football march