Disgruntled students of the Plateau State Polytechnic staged a peaceful today, September 20, over the postponement of their semester examinations by the school management. The exams were reportedly postponed due to a strike action recently embarked on by lecturers of the institution.

According to Deborah John, one of the aggrieved students who spoke to newsmen, they were expected to commence their examinations on Monday, September 20, and upon their arrival at school, they found a circular stating that lecturers have been on strike since Friday. 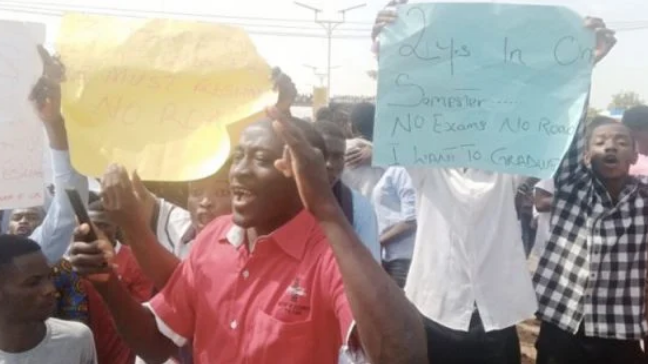 The student who described the industrial action as a ploy to truncate their academic journey said they have spent over three years in one semester due to the Covid-19 lockdown, as well as the incessant strikes embarked upon by their lecturers. She explained that students were fed up with the strikes and just wanted to write their examinations and move on with their lives.

Another student, Isreal Longdu, who also spoke to newsmen condemned the constant strikes embarked upon by their lecturers, saying the development has stagnated their academic progression.

It was gathered that the lecturers had issued a notice of strike to the government over what they called ''its inability to meet their demands of earned allowances and other sundry issues''.

No fix date for students resumption as speculated - PLAPOLY SUG