The Nigerian Army has confirmed the detention of one of its female personnel who went viral in the past week for accepting a marriage proposal from a male corps member at the yikpata orientation camp, Kwara state.

According to the Army Director of Public Relations, Brigadier General Onyema Nwachukwu, the female officer violated military laws by getting involved in a public display of amorous relationship with a paramilitary trainee, a corps member. 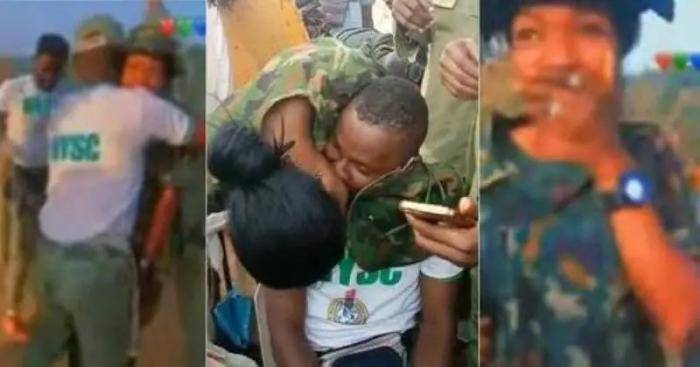 He listed the rules violated by the female officer as;

1. Fraternization while on official duty at the NYSC camp. That is, indulging in an amorous relationship with a trainee.

2. A personnel must have served for three years before he/she can qualify for marriage.

3. She disobeyed the Armed Forces of Nigeria's standing guidelines and directives for the use of Social Media.

4. Indulging in romance while in uniform.

5. Her conduct was prejudicial to good order and military discipline.

However, Nigerians feel the female officer's case is different because she is a lady as they dug up photos and videos of her male colleagues proposing publicly to their partners while wearing the Nigerian army uniform.

FG can borrow money for charity, but can't borrow to fund education- ASUU hits back at Minister