The Lagos State University College of Medicine LASUCOM inducted 49 Medical Doctors and 7 Dental Surgeons on Friday 20th November 2020, with a call on the Inductees to use their acquired competencies to further bring about desirable transformation in health care delivery.

In his goodwill message to the inductees, the Vice Chancellor, Lagos State University, Prof. Lanre Fagbohun SAN NPOM who was represented by the Deputy Vice Chancellor (Admin) Prof. Oyedamola Oke, congratulated the Inductees for committing to excellence and professionalism as they pledged to the Hippocratic Oath 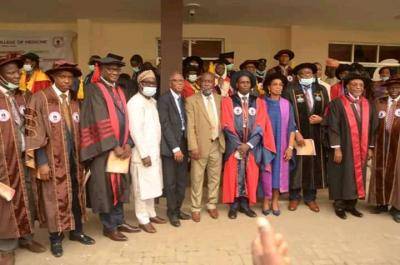 In his address, the Ag. Provost of the College, Prof. Abiodun Adewuya disclosed that the College had been given the nod to carry out Covid- 19 Test in the state

According to him, the Molecular Laboratory of the College had just been granted licence to operate hence, the College can now conduct Covid-19 Test.

He stated that LASUCOM has added another 49 Medical Doctors and 7 Dental Surgeons to the pool of Doctors and Dentists in the county, bringing to 858 numbers of medical personnels produced till date by the College

He observed that despite the pandemic, the College have continued to attracts research grants running into millions of Naira.