August last year a ghanaian made effort to invent a bicycle that moves on water. He managed to finish his creation and tested it in a shallow dam in his area.

Now, the young inventor believing in his finished work, decided to test it out on the sea to prove to the world that his invention had come to stay. 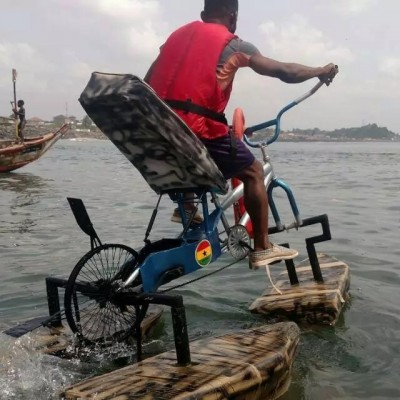 According to the information gathered, Frank Darko revealed that he wanted his invention to help the school children who had to swim to school, find an easier path to their classes, it was also said that many individuals have also requested to have him make a copy of the bicycle for them.

He said he wanted to contribute to the development of Ghana with his invention. He however called on stakeholders and benevolent bodies to invest in his breakthrough invention so as to make the lives of many Ghanaians easy.

The young inventor revealed that the special bicycle is his first invention but he had drawn up plans for many more inventions. See photos below...

Frank Darko revealed that his creativity came about as a result of his matchless love for science, technology and the urge to solve day-to-day problems faced by people living in the community.