A Kwara State High Court sitting in Ilorin and presided over by Justice Mahmood Abdulgafar, on Tuesday, July 27, convicted and sentenced three students of Nigerian tertiary institutions to various jail terms, after the court found them guilty of various offenses bordering on love scam and internet fraud. 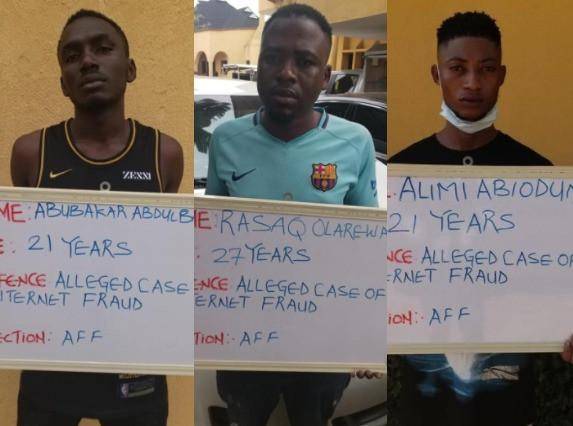 The convicts who pleaded guilty to the charges preferred against them by the EFCC were handed jail terms ranging from three months to one year.

Opeyemi was sentenced to six months imprisonment, which shall be suspended for one year, and he was ordered to forfeit the iPhones, HP Laptop which was instrumental in committing the crime, and a draft of N50,000 (Fifty Thousand Naira) to the Federal Government.

Abiodun, on the other hand, was handed three months imprisonment on count one and one year imprisonment on count two, which shall be suspended for one year. He was also ordered to forfeit his iPhone and the sum of N352, 000 (Three Hundred and Fifty-Two Thousand Naira) draft raised by him, to the Federal Government.

Idowu was sentenced to six months imprisonment, which shall be suspended for six months, and ordered to forfeit his 2014 Toyota Venza, 2 iPhones, HP Laptop, the sum of N404, 414.93 (Four Hundred and Four Thousand, Four Hundred and Fourteen Naira, Ninety Three Kobo) in his First Bank account to the Federal Government.