Child Bride Who Went Viral Goes Back to School

Miss Chinwendu, whose story made headlines sometime around January has now returned to school as of yesterday October 8th. Recall that earlier this year the story of Chinwendu, a 15-year-old girls who was forced to get married to an older man went viral.

Following the unwelcoming News, it was reported that the state Commissioner for Women and Children Affairs, Mrs Ndidi Mezue followed up the story and came to the girl's rescue. According to reports, Chinwendu has been empowered with tailoring skills and has now been registered in school where she will continue her education. 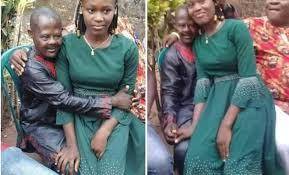