Three children of Dr. Isma’il Ado Funtua, the deputy provost of the Isa Kaita College of Education in Dutsinma, Katsina State have been abducted by armed bandits who stormed the institution on Monday, September 6.

The incident reportedly happened around 11:30 pm when the heavily armed assailants numbering about four, invaded the campus and broke into the deputy provost's residence, who was not present at the time. They were said to have removed the padlock on the door and entered the house after they met the gate unattended to by the security man. 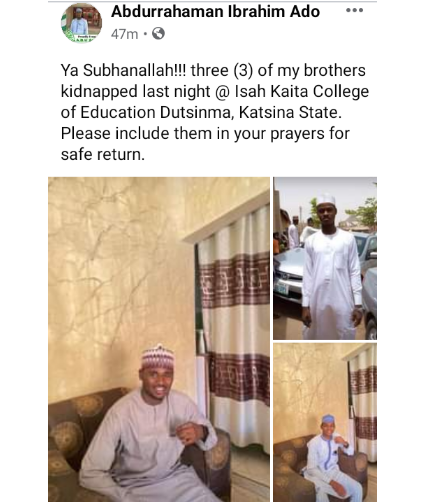 They went into the parlor where they met the abductees, Usman, Aminu, and Abdullahi, reading, while the fourth child who had sighted them in time was able to sneak out. They were kidnapped alongside the gate attendant who was eventually released.