Two children killed as school fence collapses on them

Two children have lost their lives after the fence of Covenant Point Academy school at Ajose Street, in the Amukoko area of Lagos State collapsed on them.

The victims, a 3-year-old boy named Samat Saheed and an unnamed 9-year-old girl, were reportedly in front of the school when the fence collapsed. 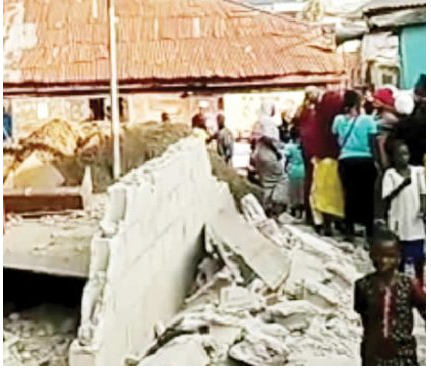 Samat, who was playing near the school, which is close to his mother's shop, was said to have been instantly crushed to death as his head suffered most of the damage, while the girl was just passing in front of the school when the fence collapsed and she lost consciousness. She died shortly after.

The police were invited to the scene of the accident and the school owner was arrested as it was discovered that the fence had no pillars nor wiring, but just stacked blocks.

Officials from the Lagos State Building Control Agency visited the area on Sunday morning, September 11, to inspect the building.