See What A Teacher Did To A 4-Year Old Pupil

A woman posted pictures of a 4-year old boy who was said to have been pushed down from his desk by his teacher. The boy ended up sustaining severe injuries.

As seen on the screen shot, the boy almost lost all of his front upper teeth. What could have made the teacher to behave in such an unproffessional manner is yet to be acertained. 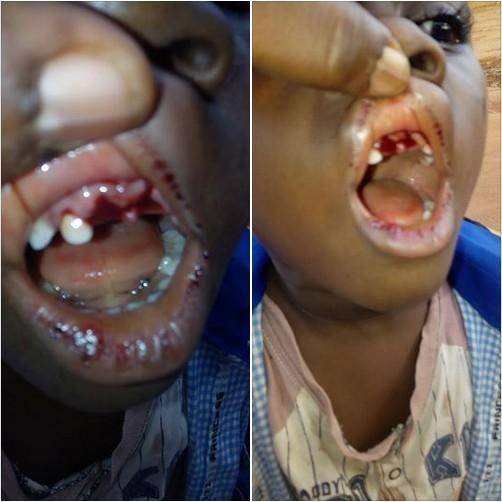 It was gathered that after the incident, the teacher never bothered to contact the parents of the child even after seeing the gravity of what she did and the pain the child must be passing through.

The boy was left in pain until his mother came to the school to pick him and his siblings up after school.

We learnt that the two teachers handling the young boy's class have already been suspended.

The question is what could the child have done to attract such inhuman treatment from the so called teacher.

j.fizzy
1 year ago
Lack of passion for the job and frustration for not finding a better job. If na me I go make sure say that teach go jail
Like 0    Dislike 0    Reply    Quote    Follow