Recall Lekan, the man who was mistaken for a mentally challenged man, that stormed the primary school during a lunch break to attack the pupils. Well report has it that Lekan is mentally fit, as you can see in the picture, he doesn't look mad. 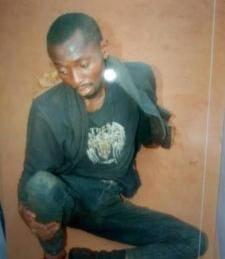 While he was paraded yesterday, the state Commissioner of Police, Ahmed Iliyasu assured the people that the suspect will be brought to justice soon.

Speaking with the jornalist, the suspect blamed his actions on frustration, he said he was broke.

He said he hadn't had food to eat in the last two weeks, he further explained how he begged the people around but he was rejected, so he became frustrated this was because when he had, he helped the people around him but couldn't get help in return.

According to him, he is ready to face the consequences of his actions