Due to the ongoing COVID-19 crisis, students have been mandated to stay at home in order to curtail the spread of the virus. We understand how boring this may be for students. Therefore, as a way to engage your minds and keep you all busy, Myschool will be organizing an online competition tagged "COVID-19 Stay-at-home CBT and Essay Challenge" There will be cash prizes to be won. This is our own little way of contributing towards cushioning the effects of this current situation.

The COVID-19 Stay-at-home CBT and Essay Challenge will be a double-edged competition which will comprise essay writing and CBT Challenge and will run from Monday 6th April to Monday 13th April 2020. Participants are advised to ensure they read the requirements, guidelines and other instructions given below; 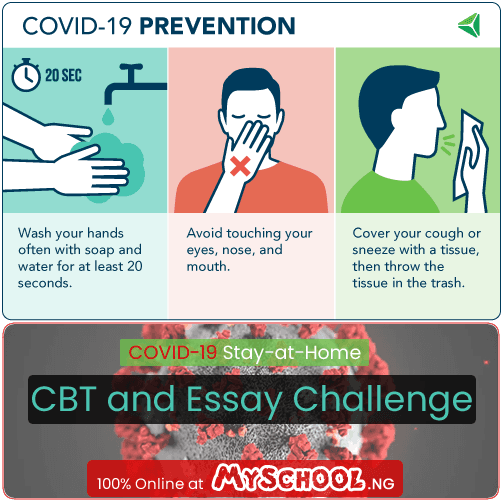 REQUIREMENTS AND GUIDELINES FOR THE ESSAY WRITING

1. The competition is open to all students

2. To participate, a student must have registered as a member of myschool.ng. CLICK HERE to create your free membership account. If you are already a member, you do not have to register again, just log in with your existing login credentials.

3. Students are to write on ONE of the topics below;

5. Only one essay may be submitted per student (Submitting more than one essay even with a different account is not allowed)

6. The essay must be original. Avoid plagiarism, as the essays will be checked for intellectual authenticity.

7. Candidates are to post their essays in the comment section of the post that will be created for that purpose once the competition begins on April 6th. The top 5 essays with the highest number of likes and in line with the other rules of the competition will be declared winners.

8. Participants are free to canvass or solicit for likes by whatever means possible. However, you are not permitted to like your own essay more than once. This means participants should desist from creating different accounts to like their own essays.

REQUIREMENTS AND GUIDELINES FOR THE CBT CHALLENGE

1. The competition is open to all students

2. To participate, a student must have registered as a member of myschool.ng. CLICK HERE to create your free membership account. If you are already a member, you do not have to register again, just log in with your existing login credentials.

3. Once the competition begins, participants are to visit the Myschool CBT Exam Page. The direct link is www.myschool.ng/classroom/exam

4. Read instructions on the page, then select the "JAMB SIMULATOR" as the exam option.

5. Students are to participate with only one account, creating different accounts for the purpose of the competition is not allowed.

6. English Language and Mathematics are compulsory. If you intend to qualify to win, you must select English Language and Mathematics and then 2 other preferred subjects. Participants are NOT to choose any of these subjects: Animal Husbandry, Agriculture, Arabic, Civic Education, Fine Arts, French, Hausa, History, Home Economics, Igbo, Insurance, IRK, Music, Sweet Sixteen, Yoruba

7. Participants are to ensure they select the "FULL EXAM MODE". Only "full exam mode" is allowed for the contest.

8. You are required to correctly solve the questions given to you by the system, and be among the top 5 students of the CHALLENGE RANKING, as graded by the Myschool CBT Ranking System.

9. The system will automatically collate winners at the end of the competition (April 13th). Once you fall in the top 5, YOU WIN!

The winners will be declared at the end of the competition i.e April 13th, 2020. Once you are confirmed a winner of any of the prizes, you will be contacted to provide your account details and whatever amount you have won will be duly credited to you.

Please note that Myschool reserves the right to modify the terms and conditions of this Challenge at any time to ensure fairness to all contestants.

Dende
4 months ago
What a great idea from myschool to keep boredom away from students during this period. They just like giving back to the society as much as they can. I have not seen any other website that cater for students academically and financially free of charge like myschool. You are the best, may you continue to prosper.
Like 37    Dislike 1    Reply    Quote    Follow

VickStorm
4 months ago
Solicit for likes? They ruined everything when they said comment with the highest number of likes is one of the criteria for winning. An introverted individual could never win something like this assuming he had only 5 friends.
Like 13    Dislike 0    Reply    Quote    Follow

Jupiter
4 months ago
It's a very good idea, but myschool, remember that we are totally discouraged by the idea of winning by number of likes. My question is, how will you know when someone used multiple accounts just to like his/her own essay? Many of us will not even participate, lest their time, energy and resources will not drain down. You are suppose to judge, or choose contestants for us to vote. Please think about it.

Secondly, I suggest MATHEMATICS be optional with PHYSICS, especially for the sake of many of the science students.
Please myschool, take action.
Like 4    Dislike 2    Reply    Quote    Follow

Divine01
4 months ago
I would like to say "i love myschool"
your indifatigable approach towards educational elevation is laudatory
it would really be of your interest that many pens have risen to materialise the inscription beyond.
But why would number of likes be their dehorter?
is there no other measure besides 'number of likes'..
like my friends above,the collation of top 5 best articles by myschool would be a great induction towards achieving an even-handed conclusion,then could their be an avenue for voting the collated files..
please think about that myschool..
let us not leave so many hearts dissappointed after much efforts exhausted..
God bless myschool and all optimistic members in this forum..
more grace..
Like 6    Dislike 2    Reply    Quote    Follow

Emeka izukanne
4 months ago
Yes o, am fully ready for this competition... Please is one allowed to participate in both the essay and the quiz?
Like 1    Dislike 1    Reply    Quote    Follow

Ladzzy
4 months ago
This is a very nice initiative by myschool.com. My question is, does the essay submission start on Monday 6th? About the quiz, is it that you can write as many full mode exams at different times to get high marks?
Like 0    Dislike 0    Reply    Quote    Follow

Emma368
4 months ago
This is a very nice initiative.

Myschol, I'll like to appeal to you guys to make Mathematics Optional, especially for students that are in the biological sciences.
Please, Let's Write Physics in place of maths.

PC's dvice
4 months ago
Myschool please substitute maths for the sake of some students who didn't specialize in that area during their UTME.
PLEASEEEEEEEEEEEEE. I BEG OF YOU!!¡¡!!!!!!!!
Like 5    Dislike 1    Reply    Quote    Follow

Musa-avu_Stay_At_Home
4 months ago
this is good but myschool how can one will get more likes since everybody is stroggling to partispate on it.
i want to call on myschool to change the system of this programme please
Like 1    Dislike 1    Reply    Quote    Follow

Kingdavid
4 months ago
Wow this amazing thanks to myschool when can we start to submit the essay?
Second